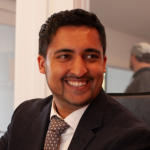 Ahsan was born and raised in Boonton New Jersey. He held a variety of different jobs to pay for his college tuition.

Ahsan has delivered Pizzas, Made Protein Shakes, and Sold Cell phones before he graduated College.

Fun fact Ahsan likes to share, he has worked a shift in every hour of any weekday.

Ahsan graduated from William Paterson University where he studied Economics and Political Science with a Minor in Pre Law. After graduating Ahsan was a Personal Banker for 7 years for different Financial Institutions helping folks like you with many of their banking needs including loans and investments.

The most important reason Ahsan decided to open his own Agency was because when you sell products for one company their products are not always what’s best for the client. Being an Independent Agent allows him to put his clients interest first always. Life is complicated as it is without worrying if your Insurance Agent is doing everything they can for you. You deserve an Insurance Agent who cares about you.